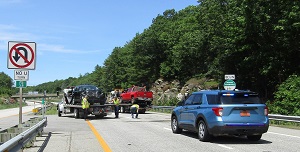 On Monday, July 5, 2021, at approximately 11:18 am a Maine State Trooper observed a vehicle speeding on the Turnpike in the northbound lane at mile marker 40 in Scarborough. The driver of the red Chevy Silverado work truck, stolen out of New Hampshire, refused to stop and continued at a high rate of speed, weaving in and out of traffic including in the breakdown lane. The Trooper initiated a chase but quickly terminated it at mile marker 42 due to construction and traffic congestion in the area. Another Trooper picked up the chase at mile marker 52, eastbound on the Falmouth Spur where there was a lot less traffic. Before State Police could deploy spike mats the driver of the stolen truck entered a crossover to the westbound lanes and struck a black Honda CRV from Massachusetts head-on. The three adults in that vehicle were transported to Maine Medical Center. One of the adults has serious but non-life-threatening injuries.  The westbound lanes of the spur were shut down but have since re-opened.

The male passenger of the stolen truck was transported to Maine Medical Center with minor injuries, he is not being identified. The female driver, 33-year-old Mary Jo Hefferon of Farmington, New Hampshire was brought to Maine Medical Center with serious but non-life-threatening injuries.
Hefferon was charged with eluding, violation of conditions of release, operating without a license, reckless conduct with a dangerous weapon, driving to endanger, and receiving stolen property.