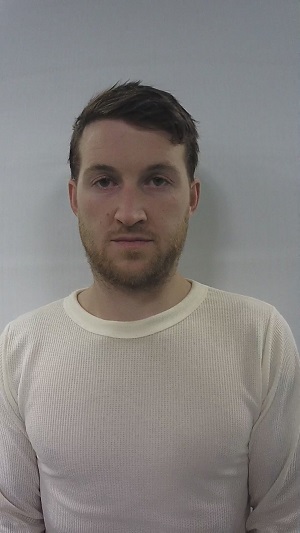 A Mount Vernon man is in custody after fleeing from police on foot before stealing a snowmobile to continue eluding police.

On Wednesday, February 26, 2020 around 2:45 pm. Trooper Travis Luce from Troop C located and stopped a vehicle on the Bean Road in Mount Vernon in an attempt to arrest one of the occupants in the vehicle for two active criminal arrest warrants. Caleb Hupper (30) of Mount Vernon ran from the vehicle and a foot chase ensued through the woods and onto a snowmobile trail where he stole a snowmobile and continued to elude police. Law Enforcement Officers from Troops C and D, the Maine Warden Service, Maine Fire Marshalls Office, Maine Forrest Service Airwing and Winthrop Police Department assisted in the call. Shortly before 5 p.m. Trooper Hunter Belanger and K9 Dallas located Caleb on a snowmobile trail near Maranacook Community School in Readfield which is approximately 7 miles from where the initial foot chase took place. School officials were made aware of the incident and were asked to take precautionary steps to ensure the safety of anyone on school grounds.

Hupper was arrested on active criminal warrants for Violating Conditions of Release stemming from charges of Operating After Habitual Offender status, Driving to Endanger and Failing to Notify of a Motor Vehicle Accident. The second warrant was for charges of Theft by Unauthorized Taking or Transfer of Property, Failing to Submit to Arrest or Detention and Violating Conditions of Release.

Hupper was issued new criminal charges for Eluding, Failing to Stop, Failing to Submit to Arrest or Detention, Theft by Unauthorized Taking for Transfer of Property and additional Title 12 violations.  He was transported to the Kennebec County Jail without injury or further incident.

The Maine State Police credits the unified and dedicated work by all the agencies involved in apprehending Hupper. They would like to thank the members of the public who assisted in providing updated information to patrol units as it became available.