On Monday, February 14, 2022, at approximately 11:45 a.m., Maine State Troopers  were assisting the Auburn Police Department  with an attempt to locate 31-year-old Brandon Pelletier of Auburn who was wanted on numerous felony warrants. Troopers approached Pelletier’s vehicle with their blue lights activated. Upon seeing the Troopers Pelletier proceeded to ram one of the two cruisers and began to flee the scene.

Troopers were able to catch up to Pelletier’s vehicle and a pursuit began. Troopers along with the Androscoggin County Sheriff's Office pursued Pelletier throughout Auburn. During the pursuit Pelletier hit numerous vehicles who were traveling on the roadway. Troopers attempted numerous times to end the pursuit but were unable to, due to Pelletier attempting to hit their cruisers with his vehicle. The pursuit continued into Minot where Pelletier struck another vehicle. Troopers attempted to disable Pelletier’s vehicle again. Pelletier then swerved towards one of the cruisers, striking it and causing his own vehicle to roll over. Pelletier refused to exit the vehicle and a police K-9 was deployed to apprehend Pelletier.

Pelletier was transported to Central Maine Medical Center with minor injuries. Pelletier was wanted for multiple charges including robbery.  New charges stemming from this incident include driving to endanger, reckless conduct with a dangerous weapon, refusing to submit to arrest or detention by force, leaving the scene of a crash, criminal speed and numerous other traffic infractions. A search of the vehicle resulted in the discovery of cocaine and fentanyl. Androscoggin SO, Auburn PD, Mechanic Falls PD, Minot Fire and United Ambulance assisted the Maine State Police.

Anyone that was struck by the offending vehicle is asked to reach out to Sgt. Chris Farley at the Maine State Police 624-7076. 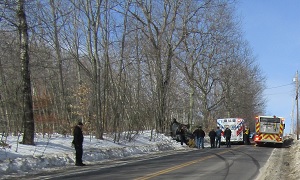