Recently, 38 students from across the state of Maine spent three days and two nights at the Maine Criminal Justice Academy in Vassalboro to get a taste for the challenges and opportunities that await them with a career in law enforcement.

The cadets stayed in billets (32 males on one floor, and six females on another), the same housing that potential Troopers and Officers use during the 18-week Basic Law Enforcement Training Program, and 10-week Recruit Training Troop (the additional, specialized training Maine State Troopers undergo after the BLETP). While there, the students spent time in the classroom and the grounds of the Academy getting a sense of the training and skill sets needed to become a Law Enforcement Officers.  Instructors were hand-selected by Corporal Breanne Petrini from agencies across the state and specialties within the Maine State Police.

On the first day, after storing their gear, the cadets were greeted by Lt. David Trip, the commandant of the Maine Criminal Justice Academy and Commander of the specialty units of the Maine State Police. He explained to the cadets that the Junior Trooper Academy is a chance for the students to take control of their futures.
“This is a huge opportunity for you. When it comes to Junior Troopers and those [who take advantage of the] Internship Program during college, these folks often have a high percentage of getting hired as Troopers,” said Lt. Tripp. “Becoming a Trooper involves living your like life you want to be a Trooper and embodying our core values of Integrity, Fairness, Compassion, and Excellence.”

He explained that this involves integrating the lessons from the three-day academy into their everyday lives, not falling into poor decision-making or peer pressure. The choices that these teens make will have an impact on their success in the not-too-distance future, something that recruiters will look at during the hiring process.
“[At the JTA] We give you all the information you need to be successful – what did you do with it? Did you utilize it or did you cast it aside?” he asked. “When I say that you are Maine’s tomorrow, you truly are. I hope you embrace that and that we see you back here.”

Cadets learned about the history of the Maine State Police, had classes on ethical decision making, social media and law enforcement, motor vehicle high-risk stops, K9 demonstrations, criminal intelligence, and crime scene investigation. Each day there was also Physical Training, defensive tactics, and drill and ceremony.
A large amount of planning goes into the JTA and Cpl. Petrini starts the planning process six months before cadets arrive, juggling schedules of instructors and making sure things move smoothly for cadets and staff. She says that there is a big change in the cadets from the start of the JTA compared to the last day. 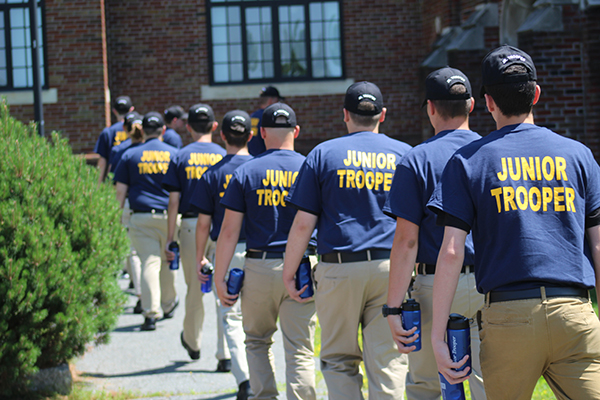 “There’s a huge change in confidence, bearing and just how they carry themselves. There’s a sense of pride. They’ve challenged themselves in ways they’ve never been challenged,” she said. “Every single one of them was here because they wanted to be here and they were eager to learn. This group 100-percent wanted to be here to learn more.”

The three-day Academy culminated with a showcase of specialties for the Maine State Police where Troopers from the Evidence Recovery Team, Bomb Team, Tactical Team, Underwater Recovery Team, Crisis Negotiation Team, Incident Management Team, Crash Reconstruction Unit were on hand to tell the cadets and their families about their jobs and offer demonstrations.

“It was awesome. Very intense,” said Isaac Plante, who had recently graduated from Sanford High School and planned on pursuing a career as a Maine State Trooper. “I was looking for [the JTA] to get me ready. … The coolest part was on the last day – looking around at the different aspects of [The Maine State Police] and the Tactical Team. It’s something I can see myself doing in the future, once I become a Trooper.”

Then the cadets and families headed inside for graduation ceremonies, displaying drill ceremonies they had learned over the course of the Academy. After all had been called to receive their certificates, there were smiles and handshakes and hugs and 38 cadets would go back to their parts of the state, all further down the path to their life goals.