The Maine Learning Technology Initiative (MLTI) is a program within the Maine Department of Education’s Office of Innovation. The program is implemented and managed by the Learning through Technology Team. MLTI partners with Maine schools to provide students and educators access to technology and learning to help them prepare for a global economy.

The concept of the Maine Learning Technology Initiative began in 1999 with a vision of former Governor Angus King to prepare Maine's students for a rapidly changing world. A task force was formed and in early 2001 and issued a report titled, "Teaching and Learning for Tomorrow:  A Learning Technology Plan for Maine's Future."  The report included a recommendation that Maine pursue a plan to deploy learning technology to all students and teachers in 7th and 8th grade, with possible expansion to other grade levels. The task force report also included five guiding principles which have been embedded into the work of MLTI and essentially remain unchanged after more than nineteen years. The MLTI plan was first introduced with the passage of legislation that was enacted and implemented in 2002. The legislation and the plan’s implementation gave the State of Maine the designation of the first State to provide 1:1 portable computers to 7th and 8th grade students and middle-level educators.

In the more than two decades since then the program was initially introduced it has grown to include over 70,000 devices deployed under the program’s umbrella of services, nearly 125 schools still remain on State supported internal broadband services, and professional learning that targets 6000 grade 5-10 educators. Eighty-eight (88%) of Maine School Administrative Units (SAUs) participate in the MLTI program. Participation in MLTI provides an opportunity for SAUs to receive a complete middle-level technology package.

In 2019, the Maine Department of Education and the MLTI Advisory Board redeveloped the MLTI plan, redesigning it to MLTI 2.0. The 2.0 program is a comprehensive set of supports that include software, broadband and wireless network support, technical support, professional learning, and monitoring and support, that together the components aid all local school districts to effectively use technology for teaching and learning. The 2.0 program goal is to close Maine’s digital learning divide by providing State support and resources that will equalize access to technology in order to enhanced educational experiences for students. To read more about the history of MLTI click here. 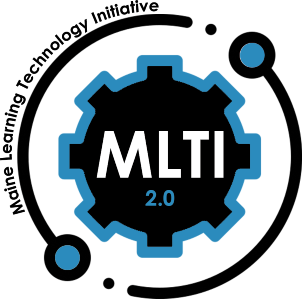