The western North Atlantic Ocean is home to a variety of marine species. One such group of animals, referred to as Highly Migratory Species (HMS), are capable of traveling thousands of miles each year for the purposes of foraging, reproduction, and finding optimal habitat. The biological diversity seen within HMS, which includes tunas, billfishes, and sharks, is some of the greatest amongst any group of fishes. From the large filter-feeding whale shark (Rhincodon typus) to the small and fast-swimming skipjack tuna (Katsuwonus pelamis), HMS of all shapes and sizes can be found inhabiting the waters of the Atlantic. Perhaps the most notorious and charismatic of these fishes, particularly in New England waters, is the white shark (Carhcarodon carcharias). White sharks have been historically documented in New England, and are most often observed during the months of July, August and September (see graph below). White sharks are considered an apex predator, meaning they exist at the top of the food web with few to no predators. Young white sharks predominantly prey on bony fish, squid, and smaller sharks, but as they grow and mature the primary source of food transitions to lipid-dense prey, such as marine mammals.

Concerning the global population status of white sharks, the International Union for the Conservation of Nature (IUCN) designates the white shark as a species vulnerable to extinction risk. There are several reasons for this classification, including a general lack of information regarding critical habitat use, slow growth rates, slow reproduction rates, and a general tendency to travel in areas inhabited by humans (i.e., nearshore). However, on a regional scale, white shark populations in the western North Atlantic appear to be in a slow state of recovery. Research suggests that white shark abundance in the western North Atlantic has increased in recent years following the implementation of shark conservation measures in the 1990's and the protection of marine mammals in the 1970's, which resulted in the recovery of New England seal populations, which are a primary food source for sub-adult and mature white sharks.

In 2020, the Maine Department of Marine Resources, in collaboration with Massachusetts Division of Marine Fisheries, the Atlantic White Shark Conservancy, and Dr. James Sulikowski of Arizona State University, initiated efforts to monitor the presence of white sharks in Southern and Mid-coast Maine waters. Each year, scientists place acoustic receivers at fixed locations along the coast of Maine, leaving the devices submerged one or two meters beneath the surface. These receivers are designed to detect nearby acoustic transmitters, also known as tags. There are approximately 250 white sharks that have been outfitted with acoustic tags in New England, and when one swims within a few hundred meters of an acoustic receiver, a detection is recorded. Each winter, scientists at the DMR retrieve the acoustic receivers, download the detection data, and assess shark activity from the past year.

The receiver array was made possible in 2022 thanks to members of the New England White Shark Research Consortium, with special thanks to Massachusetts Division of Marine Fisheries, Atlantic White Shark Conservancy, and the research lab of Dr. John Mohan of University of New England. Transmitters detected by this array originate from regional collaborators both within and outside the consortium. Receiver deployment was made possible by Maine Marine Patrol, Ed Hutchins and Riley Austin of the F/V Christina Mae II, and Justin Papkee of the F/V Pull N’ Pray. The sightings database would not have been made possible were it not for the citizen scientists who graciously took the time to submit their shark observations, and for the scientists who help vet these data.

Have you seen a white shark? 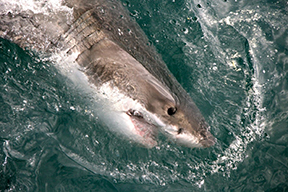 Please report it to one of the following:

Also see the Species Info page for more general information for many species.